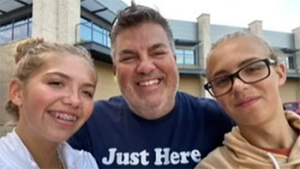 In memory of our beloved colleague, Jason Gutierrez, who passed away this past Summer, High Wire Networks and CEO Mark Porter created a GoFundMe for his two children, Larson and Chloe. Every cent will go directly to the children’s trust fund.

Details are in the link below. And, a big thanks to a few of Jason and SecureVoiceCorp (SVC) customers who’ve already made generous donations.

This past Friday, the world lost a great man. Jason Gutierrez passed away after a valiant battle with cancer. I had the privilege of talking to Jason every day since his diagnosis in December. Sometimes just a couple of minutes, sometimes a lot longer.

Over these past seven months Jason taught me much. Even as he was often in pain, enduring surgeries, dealing with the awful side effects of the various treatments, or just plain feeling bad, he was always positive. We talked about the future nearly every time. He was positive he was going to live a long time. I believed him. We believed. Even when it didn’t quite make sense to me given what was going on, his belief broke through my doubt.

The other thing I learned about Jason is that he was selfless. No matter how bad off he was, he always wanted to know how my son was doing. He was with me shortly after my son was diagnosed with a chronic life changing disease, and then shortly thereafter a second one. He made a point nearly every single day to ask how my son was doing. He followed his sports seasons and looked up articles. He wanted to know what he could do for others at work who were having issues. He just genuinely cared. I need to be more like Jason. We could all be a lot more like Jason.

In our last conversation, one of the last before he slipped away from us all, I asked Jason what I could do for him. He sounded really bad and I had a bad feeling. He told me, “Nothing today, I’m going to get this chemo started. Next week, come down here and give me a big hug.” I think that was his goodbye. I never got to talk to him again as he didn’t make it to next week.

I miss my buddy, we all miss our friend.

“Those we love don’t go away, They walk beside us every day, unseen, unheard, but always near, Still loved, still missed and very dear.” (Irish Proverb)

Check back soon for exciting news!